During our second day at sea, the conditions deteriorated somewhat. We were aware of the weather forecast which predicted 40 to 45 knot winds for the area but not until the evening when we thought we would already be in Sand Point. Just to be on the safe side, we had picked a few anchorages along the way where we could find shelter if need be. We passed the anchorages one after another because we thought the weather was not bad enough, and when it eventually got too bad and we were approaching the last possible anchorage, the anemometer jumped to 49 knots which meant williwaws and that was not a place for us. Hence, we had but one option and that was to continue straight to Sand Point. 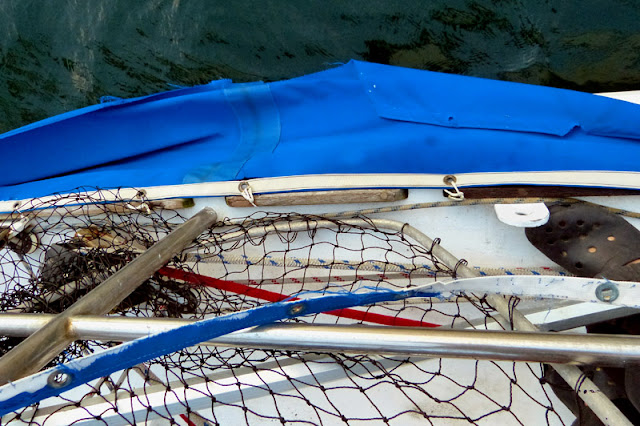 It was pitch-black and pouring with rain when we entered the narrow strait leading to Sand Point harbour. In the prevailing conditions, the strait acted as a wind funnel and we had 35 to 46 knot headwinds, gusting to 54. Because of the strength of the wind, we didn't have enough speed for the autopilot to keep the course in either navigation or heading mode, and at times we were actually going backwards. Pekka was at the helm and Riitta was navigating, and we were both shouting directions to each other at the top of our voices to overcome the hellish howling of the wind. During the storm, our national flag came tumbling down from the mizzen (we hope it's not a bad omen!), the wind shield canvas was torn apart, and two of the seams of the foresail split. Luckily nothing too serious this time, but the game is not yet over!